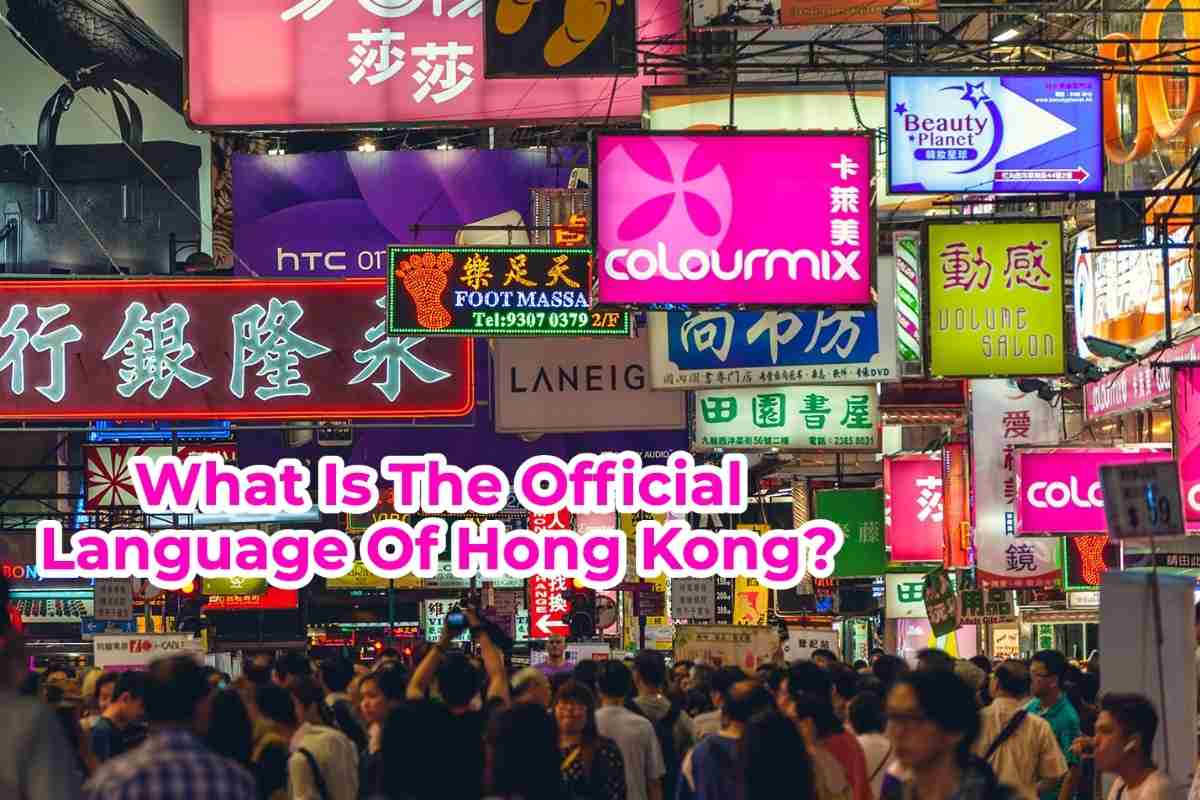 If anyone is looking to do business or travel to Hong Kong, it is good to understand the official language of Hong Kong. Hong Kong has always been a melting pot where many languages are spoken.

Cantonese As The Official Language of Hong Kong

Cantonese is the Chinese dialect that is spoken in Hong Kong. Chinese has many dialects, but the two main dialects are Mandarin and Cantonese.

Mandarin, also known as Putonghua, is the official language of mainland China. Many people in Guangdong Province in Southern China are also native Cantonese speakers.

Even though Hong Kong is now an official part of China, the official language is not the same Chinese dialect as a majority of mainland Chinese speak; most Chinese speak Mandarin Chinese or Putonghua.

English is the Other Official Language of Hong Kong

The other official language of Hong Kong is English. The courts, government, and all the services in Hong Kong still operate using both English and Cantonese Chinese.

The roads and all public transportation signs also have English and Chinese languages.

The two languages can be a problem when using a taxi as the roads in Hong Kong have two names – one that is English and the other in Chinese. I had found many drivers when I told them the English name of the road; they had no idea what I was talking about.

Even in shops, not everyone speaks English. In Hong Kong, almost all people speak English in the areas where the tourists would shop, but today as many of the tourists have come from mainland China many of the shops have felt it was more critical they speak Mandarin Chinese than English.

Hong Kong’s Basic Law in Article 9 states this about the official languages of Hong Kong:

Even though Chinese is only mentioned here in the Basic Law, the Chinese language is stood to understand Cantonese as that is the native language of Hong Kong. No one knows if one day that can change, but right now, Cantonese is understood as the official language.

I do not find this much different from living in Guangdong Province, China; whenever there are two native Cantonese speakers, they will always speak Cantonese and will only switch over to Mandarin if they are conversing with someone who does not speak Cantonese.

Today in Hong Kong, you may find that many of the announcements on public and other transportation are in Cantonese Chinese, Mandarin Chinese, and English. This is very different from China, where everything is usually only in Mandarin Chinese.

If you are going to Hong Kong for Business or even as a tourist, Hong Kong people usually prefer the business language like English, especially a foreigner. In almost every business establishment you visit, you will usually find people who speak excellent English.

Many of the top Universities in Hong Kong conduct classes in English, and many of them have English-speaking professors. If a Hong Kong person does not go to University in Hong Kong, many will go to school overseas in the United States, Australia, or the United Kingdom.

The education system in Hong Kong teaches excellent English. Speaking English is not optional but necessary among the educated Hong Kong residents and those usually working in an office environment.

I did a Master’s Degree In Chinese Law at the Open University of Hong Kong; all my classes and course work were conducted in 100% English. We did not have any classes or coursework in Chinese.

All of my Hong Kong classmates could read and write fluent English and do all the coursework in English and not Chinese. We even had 3-hour final exams for each course conducted in 100% English.

I find that the language in Hong Kong makes it a unique place. It is a place where many residents are genuinely bi or even tri-lingual as they can fluently speak Cantonese Chinese, Mandarin Chinese, and English.

The Philippines And The Tagalog Language

By clicking here, you can discover The Philippines And The Tagalog Language.

The Swedish language uses a lot of prosody in the language. It also has unique word stress with long and short vowels or consonants. Swedish uses an acute tone accent or a grave tone accent. When Swedes speak, they will stress the most critical word; and which word they stress can change the entire meaning of a sentence.

You can learn more by reading Why Does The Swedish Language Sound Like Singing? by clicking here.