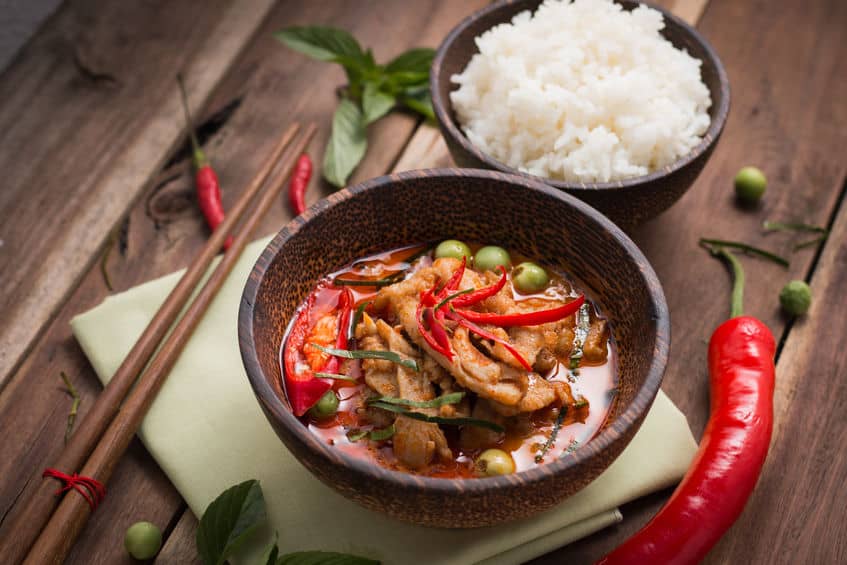 Thai food is spicy as it is actually a combination of a few kinds of cuisines as Indian, Chinese, and Portuguese. The Indians brought curry to Thailand. The Chinese taught the Thais how to cook using a wok, and the Portuguese traded in a lot of fruits and vegetables including the red chili.

A Bit About Thai Food History

Like most countries, Thai food has changed and adjusted over the years as the history of Thailand has also evolved, and outside influences came into Thailand. I love this history of Thai food as it shows how the Thai people were able to take the best their foreigner visitors brought them to produce what is now some of the most sought after food in the world today.

Indian Influence on the Thai Food

The Indians from India were known to be in Thailand during the Sukhothai and Ayutthaya periods during the 13th Century and beyond. We know there was a sizeable number of Indians in Thailand, as this was mentioned by numerous western travelers and traders who came to the Thai courts around that time.

The Indians brought with them some of their spices. It is believed that the Thai’s learned from the Indians how to use spices in their cooking and food in a variety of ways. We can thank the Indians for the wonderfully hot and spice flavors of Thai food that we have today.

One of the spices the traders from India and later Persia brought to Thailand is the curry spice. The Thais adapted these dishes so that they became known as simply “Thai Curry.”

There are three basic types of Thai Curry:

Besides giving the Thai’s the curry, the Indians also taught the Thais about their herbal medicine. Many of the herbal medicine plants found in Thailand today originated from India.

The Chinese also influenced Thai food. In the 15th Century, many Chinese came to Thailand. In fact, the Chinese are now a majority of the Thai business population or what is commonly known in Thailand as Thai-Chinese.

Like the Indians, the Chinese also brought to Thailand a lot of their foods like tofu, rice porridge, noodles, stewed pork, and rice. The Chinese introduced the Thais on how to stir-fry with the wok and deep-fry foods.

If you want to find out more about the stir-fry method of food you can read our blog on What is the Asian Stir-fry Cooking Method? by clicking here.

The first westerners to Thailand were the Portuguese. They came to Thailand in 1511. The Portuguese also brought with them many of their recipes as custard where they used coconut milk to replace cows milk for the custards they made in Thailand.

One of the most important influences on Thai food came in the 16th or 17th century when the small red chili pepper was brought to Thailand from the Americas. This happened during the period known as the Columbian exchange, or the Columbian interchange.

It was during these Columbian Exchanges that the Spanish and Portuguese traders brought to Thailand foods and plants such as red chilis, tomatoes, corn, papaya, peas, eggplants, pineapple, pumpkins, cilantro, cashews, and peanuts. All of these foods are now a major part of the Thai diet and an integral part of Thai food and Thai cooking.

Not All Thai Food Spice is The Same

This may surprise some visitors to Thailand but not all spicy Thai food is the same. For example, the southern Thai food can be very spicy. But in the central and other parts of Thailand, the food is spicy but not as spicy as the south.

Some of my Thai friends even have a hard time with very very spicy Thai food from the south, as it is spicer than they are used to. A trick I learned from them in eating hot and spicy food, is if the food was very spicy, you should always eat rice with the food. Rice helps take the burning sensation out of your mouth. That is how the Thai’s will eat Thai food – with a bowl of rice nearby.

Thai food is one of the most popular foods in the world. And no doubt one reason it may appeal to so many is that Thai food is a food which was influenced by the Indians, Chinese, and Portuguese traders.

What is The Philosophy of Vietnamese Cuisine?

You can read more about The Philosophy of Vietnamese Cuisine by clicking here.

What is the Asian Stir-fry Cooking Method?

The Asian stir-fry cooking method is a technique of cooking that started in China but has since spread to the rest of Asia. The food is cooked using the quick-cook method by constantly stirring the ingredients as it is cooking. It is a very easy and healthy cooking technique that anyone can master.

You can discover more about the stir-fry method by reading our blog on What is the Asian Stir-fry Cooking Method? by clicking here.