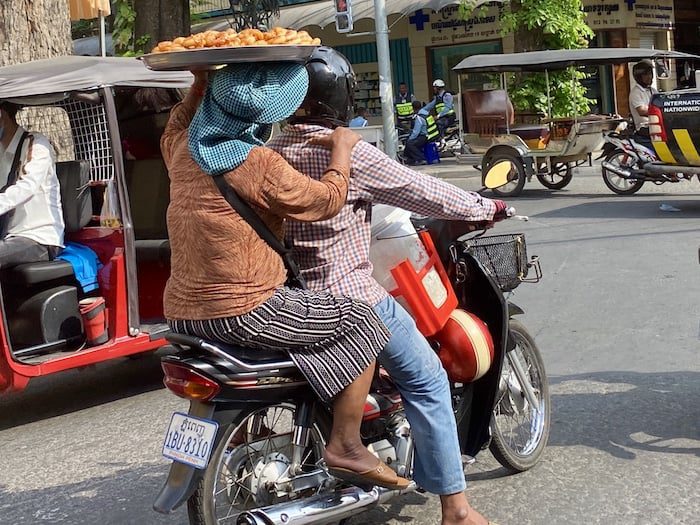 When you travel to Cambodia one thing you will see is many Cambodian’s with a gingham scarf around their necks, on their heads, or around their waist. There is perhaps no other garment that is so distinctly Cambodian as the Khmer Krama scarf.

Despite its checkered history, the Khmer Krama scarf is considered to be a symbol of Cambodian’s strength, courage, and resilience.

What is the Khmer Krama Scarf?

The Khmer Krama Scarf is a traditional Cambodian scarf that has many uses including a scarf, bandanna, covering of the face to protect the face against wind and dust storms. It can also be used for decoration, as a belt when it is wrapped around the waist. Many women may wear it on their head especially if they are carrying things on top of their heads.

It is not just a scarf to protect the Cambodians from the wind or dust, the Cambodians also use the Krama as a makeshift hammock, baby carrier, headwear to protect against the harsh sun They may use it as a towel or a wrap after a shower or bath. Or as a blanket to sleep under at night.

The Bokator martial arts, which is one of the oldest forms of martial arts in Southeast Asia, uses Krama scarfs. The fighters will wrap the Krama scarf around their waist, heads, and fists. The color of the Krama scarf signifies the level and proficiency of the fighter’s martial art ability and training. A white color scarf is for the lowest level Bokator fighters and the black for the expert level fighters.

The Weaving of the Krama Scarf

Originally the scarf was a fabric that the Cambodians women would hand-weave on their looms in their own looms. Today they are still woven by hand but not everyone will weave their own scarf.

These scarves were traditionally woven using these methods:

Cambodia has a very long history of hand-weaving fabrics. It is thought the Cambodians have been hand-weaving since the 13th Century. To find out more about Cambodia’s hand-weaving you can read the blog Hand-woven Fabrics from Cambodia, What You Need to Know by clicking here. This blog gives you some insights into Cambodia and its hand-woven fabrics.

During the time of Pol Pot many of the Khmer Rouge fighter wore the red and white gingham Krama scarves. This became a symbol of the brutal Khmer Rouge regime.

At that time, little did the people of Cambodia know what they would need to endure. It is estimated that from 1975 to 1979 over 2 million Cambodians were murdered, executed, starved to death, or died by disease during the famous “killing fields” era of Cambodian politics.

The Krama Scarf Is A Cambodian Symbol of Strength

Despite its past, the Cambodian Krama scarf is more than just a scarf, it is also a symbol of the strength, survival, and courage of the Cambodian people. This piece of fabric has followed the Khmer nation throughout all the good and bad times.

So, it can be said that this Khmer Krama scarf also has its own story of survival. As even in Cambodia today the Krama scarf remains a very important part of Cambodian life and culture.

The Cambodian Krama scarf is a symbol of Cambodia. When you wear the scarf you are wearing a Khmer symbol of strength, resilience, and survival.

Is Cambodia Safe to Travel Alone?

I have traveled alone to Cambodia many times and have always felt safe. But whenever you are traveling alone to any country, especially if you are a woman traveling alone in Cambodia, there are some precautions that you should take.

To find out more about some important precautions you can read our blog Is Cambodia Safe for a Solo Female Traveler to Travel Alone? by clicking here.

Why Should Every Cyclist Should Ride Around Angkor Wat, Cambodia?

Every cyclist should put cycling around the Angkor Wat temple complexes on their bucket list. Not only is Angkor Wat one of the magnificent architectural wonders of the world, but it is also a great way to see some amazing old temple complexes. When you cycle around Angkor Wat, you will have only the freedom to see it at your own pace, but you will also see things that you could never see in a car, bus or even a tuk-tuk.

To find out some tips and more information on cycling around Angkor Wat or Siem Reap Cambodia by reading our blog Why Every Cyclist Should Ride Around Angkor Wat? by clicking here.