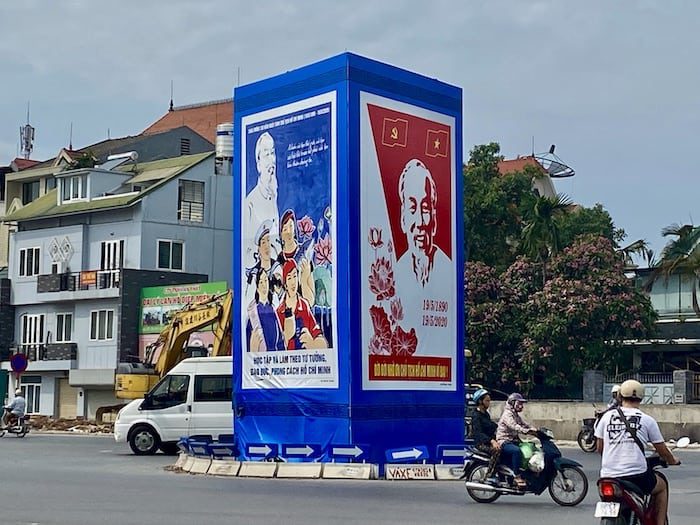 As you travel around Vietnam, you will see these large posters on the intersections and street corners which depict some kind of theme about life in Vietnam. These posters are known as a propaganda art posters.

Propaganda posters first started in the Soviet Union and then spread to other socialist countries like Vietnam. For many years, posters have been an essential part of the Vietnamese art scene. You can still see the propaganda art posters around Vietnam.

The Start Of The Propaganda Posters

In the former Soviet Union, the Marxist-Leninist ideology used propaganda art posters. These posters first appeared in the early 1990s. ,

The propaganda art posters were used to depict and show the Red Army’s many triumphs in the Soviet Union. The designs and colors were chosen to be bold with simple designs so that even the illiterate could understand the meaning of the posters.

Ho Chi Minh or Uncle Ho as he is lovingly called by the Vietnamese, understood the power of art in educating and telling a story. After the French left Vietnam in 1954, the dominant art style of Vietnam was propaganda art that followed the Leninist approach to art. The Leninists thought believed that:

Ho Chi Minh and the famous Vietnamese General Vo Nguyen Giap understood the power of art to communicate their ideas. They used art and in particular, propaganda art posters to convey their message to the Vietnamese people. This is how the very simple, yet brightly colored art became such an essential part of Vietnamese culture and life.

As the war in Vietnam raged for twenty years between 1955 to 1975, the propaganda posters became an essential nationwide rallying call to arms. The posters helped boost a sense of nationalism and Vietnamese pride.

Many propaganda artists would trek through the dense Vietnamese jungles with their comrades-in-arms, essentially hardened front-line soldiers. These same artists were not soldiers but students or volunteers, yet they lived under the constant threat of American bombers, being captured or killed. This was not an ideal environment for any artist.

Yet despite this hardship, the propaganda artists continued to produce a huge amount of important propaganda artwork. For these artists, it was a way to defy the enemy and show their nationalist pride and determination. That is why in their art during this time frame is a sense of optimism, peace, and hope for their country.

Today as you travel to Vietnam, you will see propaganda art all over Vietnam. The propaganda art is on large-size posters on major intersections, street corners, or traffic circles. In some of the Vietnamese countryside areas, you may see huge billboard-size propaganda posters.

I have lived and worked in Vietnam for many years. I have to admit until I decided to write this blog about propaganda art posters, I passed by these posters frequently but did not pay much attention to them. They are very much a part of Vietnamese culture and life, so if they disappeared, I would miss seeing them.

Here is some general information about Vietnamese propaganda art:

Where to Purchase Vietnamese Propaganda Art

One of the best places to buy Vietnamese propaganda art is in Hanoi, Vietnam. There are several very good propaganda art dealers just off of Nha Chung Street near Nha Tho Street or the big Catholic church in Hanoi. Walking up and down this street, you will see several Vietnamese small Propaganda art shops.

You can check out Old Propaganda Posters at No 4 Nha Chung Street and another gallery across the street. Some shops are selling propaganda art posters down Nha Chang Street across from the Joma Restaurant.

The Thang Long Gallery at 16 Hang Bac Street. They also carry some reprints.

The Vietnamese Propaganda Shop has reprints on rice paper, and they have a website where you can purchase online and they will send it to you anywhere in the world.

Vietnamese propaganda art posters are wonderful works of art. These amazing works of art tell a lot about Vietnam’s history, people, and culture.

What Are the Vietnamese Bamboo Instruments?

You can learn more about Vietnamese bamboo musical instruments by reading our blog Vietnamese Bamboo Musical Instruments, What You Need to Know by clicking here.

Who Built the Long Bien Bridge?

The Long Bien Bridge is in Hanoi, Vietnam. It is an iconic bridge designed by the great architect Gustave Eiffel. The bridge has a long history and is an integral part of the history of French rule throughout Vietnam. The Long Bien Bridge was a target of bombings by the American forces during the Vietnam War. Today you can ride a motorcycle, or bicycle or walk across the Long Bien bridge.